The death of a loved one. Terminal illnesses. The loss of a child. Abuse. Addictions. Heart-wrenching sufferings. If you’re praying, hoping, or waiting for something…and it is never realized…if something you hold dear is taken away…would you still love the Lord?

This is a tough, tough question to ponder. Believe me, I know. Really. I spent 4 years wrestling with this question as I considered the possibility that I may never get pregnant. I especially fought with God over this topic because I felt convinced that He had been the one to give me the desire to have a child in the first place. And then He had the nerve to not give me that desire? I felt confused, frustrated, angered, and most of all hurt. Never before had I struggled so much with the idea that God is good.

In my darkest moments, I started to believe that maybe He isn’t good, that maybe He has completely forgotten about me. But sometimes you have to experience darkness in order to notice the spark of light that was there the whole time.

I love how the movie Facing the Giants illustrates this topic. (Warning: contains spoilers) Brooke (the wife of the main character) is hoping to get pregnant. Then there was a heart-breaking scene where the main character, Grant, finds out from the doctor that he is sterile or has a low sperm count and that the two of them will likely not have children naturally. It was on the same day that Grant also finds out that he is unwanted as the head football coach, and is left feeling like a complete failure in every way. Grant and Brooke are sitting across from one another at the kitchen table as Grant pours out his heart before his wife about his tough day, and finally tells her that he can’t give her the children that she desires. They both cried and tried to tell one another it will be okay, but they both questioned God about what He was doing, where was He.

But then Grant spends the whole night in the Word, seeking after God. When Brooke approaches him in the morning, Grant asks her, “If God never gives us children, would you still love Him?” At the time, she doesn’t answer. But later in the movie, after Grant surrenders his career to God and beautiful changes take place with his team, Brooke’s heart is softened too. She also has been experiencing sickness, so she goes to the doctor to see if everything is okay. She is told that she is not pregnant, but instead of letting the despair of the disappointment overcome her, she holds her head high, and goes out to her car, where she tells God that she will still love Him if she never gets pregnant. But just before driving away, a nurse runs outside and stops her – her test results were mixed up with someone else, and she is pregnant. It was so beautiful watching her reaction to the joyous news. 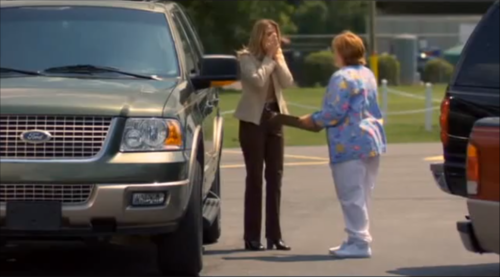 Once you notice that spark of light, there is the potential for something wonderful to happen to you.

You can begin to surrender your desires to the Lord, trusting Him to work things out according to His plans instead of yours. You can begin to experience a kind of supernatural peace that can only come from a loving, Heavenly Father. You can begin to choose joy even though your suffering remains.

And then before you know it, you realize that the room you were in is no longer dark, but is getting lighter day by day. Not because your suffering has ended, but because you have accepted that you are not the one in control (or under the illusion that you were in control in the first place). No matter how your story ends, you can still choose to trust God and choose to be joyful no matter the circumstances.